On March 17, 2011, CNN had a banner going across the bottom of the screen declaring:

“Pelosi says disaster in Japan is of ‘unbiblical proportions’.”

It makes this writer wonder what Pelosi knows about ‘biblical proportions’.

The rainbow is a reminder that God wouldn’t destroy the world by flood again; but with the tsunami’s and Katrina, just maybe He is surely thinking about it.

Events of Biblical proportions include the reason for Noah’s Ark, and this was more than a tsunami; and don’t forget the fires of Sodom & Gomorrah; the Ten Plaques of Egypt and even the Tower of Babel. Nancy, are these Biblical or unbiblical proportions?  Feel free to RSVP.

A day or two earlier, on one of CNN’s many other banners, one declared:  “Tokyo Mayor apologizes for inappropriate statement that city was suffering ‘divine retribution’.”

I could only wonder what knowledge the Mayor had of his own city, prompting his educated guess about the situation, as he sees it.

This morning, the question was answered;  NPR played part the comment, reportedly, from the Tokyo Mayor himself:  ‘…because of selfish greed, the city was under judgment’.

Congratulations to anyone who recognizes greed.  Often those guilty of it, either don’t recognize it; or, they try to justify it.

People who take $11M severance packages (Blue Cross/Blue Shield, MA); people who earn millions of dollars each year (more than most make in a lifetime) and then take additional multi-million dollar bonus’ from struggling corporations (Bankers, Auto Industry, Colleges) need to do some deep thinking; they need to take a long time in deep reflection; and, they need to do lots of looking at the devastation in Japan, while considering the possibly prophetic statement of that concerned man. 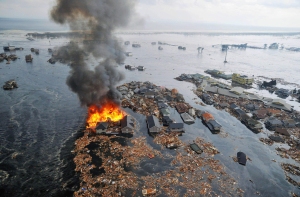 Here in America, some Corporate CEO’s are “pushing the envelope” regarding cutting costs and quality at the same time they are raising their own salaries and bonuses. How can someone reward themselves for a failing company?  Couldn’t that fit in with the Mayor of Tokyo’s comments about judgment or divine retribution for selfish greed?

Politicians in ocean front states in America, consider the Mayor’s first statement. When ‘divine retribution’ is internet searched, more of his statement is revealed to include “politics tainted with egoism and populism.”

Anyone in America saying “Ouch” yet?   Is repentance an option?

We should be forewarned.

A younger friend of mine, when discussing this, said:

“Many people have heard somewhere about basic themes of mankind’s connection with God…judgment for evil, a sovereign God, the end of the world is indeed coming, preceded by great signs in the natural world.

“The mayor of Tokyo and Pelosi’s comments strengthened this belief. More than that, it made me realize that deep in the heart of every person is a God-given understanding of our eternal soul and its relationship with God, or lack of relationship with Him. Crisis brings that which they choose not to think about, to the forefront of their minds, as well it should.”

I say again: Japan is not known as a Christian nation, yet the Mayor has a sense of a Supreme Being capable of discipline. If a Japanese man can link selfish greed  and egoism with natural disaster, maybe he knows something we are afraid to acknowledge? 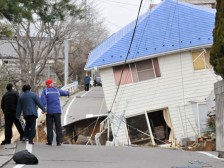 And Pelosi said the disaster there was of ‘unbiblical proportions”… when she said that, she revealed her ignorance of what is Biblical. Perhaps the Japanese Mayor could instruct her, we don’t seem to be able to tell her much – although we did in the voting booth…

I go on record as saying the Mayor has a better understanding of what is Biblical and why, than does Pelosi…and that it could very well be a warning to America. How many will really hear it and come to repentance?

misc. supporting scripture if desired   Click on  Luke 21:25-36 to see a short video or copy and paste this link into your URL:   http://www.youtube.com/watch?v=fwBwCVaUdfg

additional Scripture references on above article are shown below:

11 “Wail in sorrow, you people of Jerusalem. All your greedy businessmen, all your loan sharks-all will die.

12 “I will search with lanterns in Jerusalem’s darkest corners to find and punish those who sit contented in their sins, indifferent to God, thinking he will let them alone. 13 They are the very ones whose property will be plundered by the enemy, whose homes will be ransacked; they will never have a chance to live in the new homes they have built. They will never drink wine from the vineyards they have planted.   TLB    (Jerusalem is meant to mean home territory)

one is free to draw their own conclusions.

“Then God said to Noah and to his sons with him: 9 “I now establish my covenant with you  and with your descendants after you 10 and with every living creature that was with you—the birds, the livestock and all the wild animals, all those that came out of the ark with you—every living creature on earth. 11 I establish my covenant  with you:  Never again will all life be destroyed by the waters of a flood; never again will there be a flood to destroy the earth.”

Please check out this blog.  Thank you Bill for being so astute and well spoken.  I refer my readers herein to your blog:  www.Bill-Banuchi.blogspot.com